In this episode, Jon Huntsman Jr. shares his life and commitment to public service as a Utah Governor and our United States Ambassador to Russia and China – giving us an inside glimpse of how the world of diplomacy affects our ongoing Cold Wars and what we as citizens need to know about the global political scene!

About Jon Huntsman, Jr.:
Jon Huntsman Jr. is an American businessman, diplomat and politician who served as the 16th Governor of Utah from 2005 to 2009. A member of the Republican Party, he served as the Ambassador of the United States to Russia from 2017 to 2019, to China from 2009 to 2011, and to Singapore from 1992 to 1993. Huntsman has served in every presidential administration since the presidency of Ronald Reagan, not counting the Biden Administration. He began his career as a White House staff assistant for Ronald Reagan, and was appointed Deputy Assistant Secretary of Commerce and U.S. Ambassador to Singapore by George H. W. Bush. Later as Deputy U.S. Trade Representative under George W. Bush, he launched global trade negotiations in Doha in 2001 and guided the accession of China into the World Trade Organization. He served as CEO of Huntsman Family Holdings, a private entity that held the stock the family owned in Huntsman Corporation. He has also served as a board member of Huntsman Corporation, and as chair of the Huntsman Cancer Foundation. Huntsman is the only American ambassador to have served in both Russia and China, having served as the U.S. Ambassador to China under Barack Obama from 2009 to 2011 and as the U.S. Ambassador to Russia under Donald Trump from 2017 to 2019. While governor of Utah, Huntsman was named chair of the Western Governors Association and joined the Executive Committee of the National Governors Association. Under his leadership, Utah was named the best-managed state in America by the Pew Center on the States. During his tenure, Huntsman was one of the most popular governors in the country, and won reelection in a landslide in 2008, winning every single county. He left office with approval ratings over 80 percent and was succeeded by Lieutenant Governor Gary Herbert. He was an unsuccessful candidate for the 2012 Republican presidential nomination. He ran for governor again in 2020, but narrowly lost in the Republican primary to Lieutenant Governor Spencer Cox. 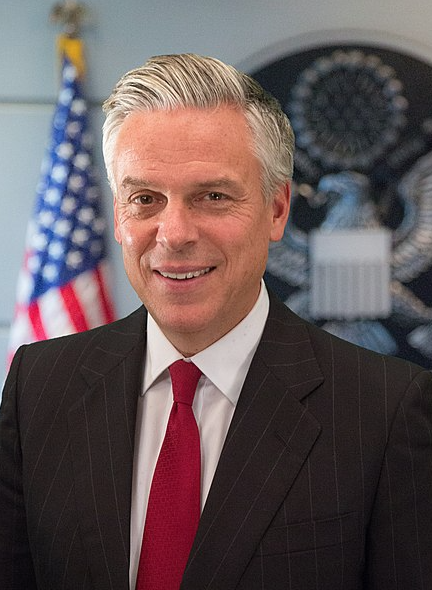